Zebstrika (Japanese: ゼブライカZebraika) is an Electric-typePokémon introduced in Generation V.

It evolves from Blitzle starting at level 27.

Zebstrika is a zebra-like Pokémon. Its coat is black with white, jagged stripes all over its body. There is one pointed stripe extending from its nose, two elaborate stripes on its neck and chest, one zigzag stripe each on its jaws, back, and hindquarters, one triangular stripe on each of its thighs, and two stripes banding each of its legs. Its ears are triangular with blue insides, while its eyes are blue with yellow sclerae and white eyelashes. Its nose is black, and its hooves are gray. A white, spiked mane runs the length of its body, beginning with two horn-like extensions on its forehead and running down its back to end in a long tail with a starburst-shaped tip. This irritable Pokémon fires lightning bolts from its mane when angry. Zebstrika can move as quickly as lightning, releasing thunderclaps at full gallop.

Zebstrika debuted in Reunion Battles In Nimbasa!, under the ownership of Stephan. It was revealed to have evolved from his Blitzle. It reappeared in the next episode, where it was used in a battle against Bianca and her Minccino, which it won. Zebstrika reappeared again in Strong Strategy Steals the Show!, where it battled Ash and his Palpitoad, with the battle resulting in a tie.

In Enter Elesa, Electrifying Gym Leader!, Elesa's Zebstrika defeated Bianca's Shelmet, Minccino, and Pignite during a Gym battle. In Dazzling the Nimbasa Gym!, it was used during Elesa's Gym battle against Ash; it battled Ash's Palpitoad and lost.

Multiple Zebstrika appeared in the opening sequence of Black—Victini and Reshiram.

A Zebstrika appeared in Crisis at Ferroseed Research!.

In Kyurem VS. The Sword of Justice, the Swords of Justice legend featured a Zebstrika.

In Jostling for the Junior Cup!, Simeon's Zebstrika competed in the Pokémon World Tournament Junior Cup. It lost to Horatio's Cinccino in the first round.

In Team Eevee and the Pokémon Rescue Squad!, multiple Zebstrika were living at a ranch at Virgil's house.

A Zebstrika appeared in a fantasy in Clemont's Got a Secret!.

Zebstrika in the animated trailer

A Zebstrika appeared in the Pokémon Black Version 2 and Pokémon White Version 2 Animated Trailer, under the ownership of Elesa.

A Zebstrika appeared in The Uprising, under the ownership of Elesa.

In the Pokémon Masters Animated Trailer, Elesa's Zebstrika was part of a team with its Trainer, as well as Sabrina and Fantina.

Be the Best! Pokémon B+W

In The Battle for More Friends!, a Pokémon Ranger used a Zebstrika with his Swanna in a Double Battle against Monta. Its LightningrodAbility let it absorb the Electric-type attacks of Monta's Emolga. It was then defeated by a Sand Force-boosted Dig from Monta's Excadrill.

Pocket Monsters BW: The Heroes of Fire and Thunder

A Zebstrika appeared in The King's Identity...!!.

Elesa has a Zebstrika, which was first seen in To Make a Musical. It was being dressed up in preparation of the Pokémon Musical. Later, it was used in a Gymbattle against Black.

A Zebstrika appeared in Up in the Air and The Final Battle: Crushed Ambition.

Fraud has a Zebstrika, which he can use as a Burst form.

Zebstrika appears to be based on a zebra. It may also be based on two of Helios's steeds that pulled his chariot—Bronte and Sterope—which are Greek for thunder and lightning, respectively, as Zebstrika's species in Japanese can be translated as the "Thunder and Lightning Pokémon".

Zebstrika may be a combination of zebra and strike. It may also be combined with a corruption of eléctrica (Spanish for feminine electric).

Zebraika may be a combination of zebra and 雷火 raika (flash of lightning). 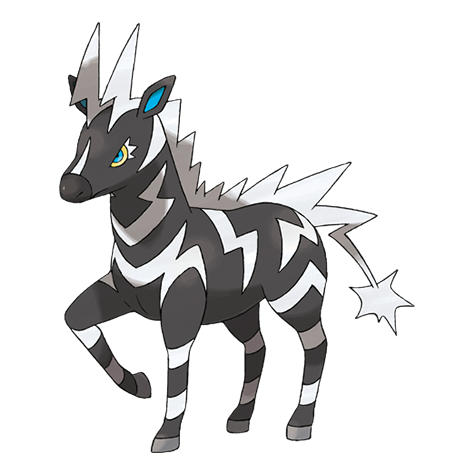 They have lightning-like movements. When Zebstrika run at full speed, the sound of thunder reverberates.

When this ill-tempered Pokémon runs wild, it shoots lightning from its mane in all directions.

Boosts its Speed stat if hit by an Electric-type move instead of taking damage.

--9010--A move that leaves the target badly poisoned. Its poison damage worsens every turn.TM10Hidden Power

6010015--A unique attack that varies in type depending on the Pokémon using it.TM15Hyper Beam

150905--The target is attacked with a powerful beam. The user must rest on the next turn to regain its energy.TM16Light Screen

----30--A wondrous wall of light is put up to suppress damage from special attacks for five turns.TM17Protect

----10--It enables the user to evade all attacks. Its chance of failing rises if it is used in succession.TM18Rain Dance

----5--The user summons a heavy rain that falls for five turns, powering up Water-type moves.TM21Frustration

??10020--A full-power attack that grows more powerful the less the user likes its Trainer.TM24Thunderbolt

901001510A strong electric blast is loosed at the target. It may also leave the target with paralysis.TM25Thunder

110701030A wicked thunderbolt is dropped on the target to inflict damage. It may also leave the target with paralysis.TM27Return

??10020--A full-power attack that grows more powerful the more the user likes its Trainer.TM32Double Team

----15--By moving rapidly, the user makes illusory copies of itself to raise its evasiveness.TM42Facade

7010020--An attack move that doubles its power if the user is poisoned, burned, or has paralysis.TM43Flame Charge

5010020100The user cloaks itself with flame and attacks. Building up more power, it raises the user's Speed stat.TM44Rest

----10--The user goes to sleep for two turns. It fully restores the user's HP and heals any status problem.TM45Attract

--10015--If it is the opposite gender of the user, the target becomes infatuated and less likely to attack.TM48Round

6010015--The user attacks the target with a song. Others can join in the Round and make the attack do greater damage.TM50Overheat

50901070The user attacks with an electric charge. The user may use any remaining electricity to raise its Sp. Atk stat.TM68Giga Impact

150905--The user charges at the target using every bit of its power. The user must rest on the next turn.TM70Flash

--10020--The user flashes a bright light that cuts the target's accuracy. It can also be used to illuminate caves.TM72Volt Switch

7010020--After making its attack, the user rushes back to switch places with a party Pokémon in waiting.TM73Thunder Wave

--10020--A weak electric charge is launched at the target. It causes paralysis if it hits.TM87Swagger

--9015--The user enrages and confuses the target. However, it also sharply raises the target's Attack stat.TM88Sleep Talk

----10--While it is asleep, the user randomly uses one of the moves it knows.TM90Substitute

----10--The user makes a copy of itself using some of its HP. The copy serves as the user's decoy.TM93Wild Charge

9010015--The user shrouds itself in electricity and smashes into its target. It also damages the user a little.TM94 (XY)
HM06 (ORAS)Rock Smash

401001550The user attacks with a punch that can shatter a rock. It may also lower the target's Defense stat.TM94 (ORAS)Secret Power

701002030The user attacks the target with a secret power. Its added effects vary depending on the user's environment.TM100Confide

----20100The user tells the target a secret, and the target loses its ability to concentrate. This lowers the target's Sp. Atk stat.
Sours: https://www.serebii.net/pokedex-xy/523.shtml

It evolves into Zebstrika starting at level 27.

Blitzle is a black, zebra-like Pokémon with thick, double-pointed white stripes on its neck, chest, back, and hind legs. It has a rounded muzzle with a large, dark nose and oval, blue eyes with yellow sclerae. On top of its head are short, triangular ears with blue insides. Below the knees, its legs are white with black hooves. Its tail is stubby, white, and has two points. Running up its neck is a spiky, white mane, which culminates at the front in a long extension that resembles a lightning bolt. This mane captures and stores electricity, which flashes whenever this Pokémon discharges energy. It communicates with other members of its species by controlling the rhythm and frequency of these flashes. During lightning storms, Blitzle ventures out to recharge its mane with lightning bolts.

Blitzle debuted in Oshawott's Lost Scalchop!, under the ownership of Stephan. It was used in a battle against Ash, where it went up against Oshawott and caused him to lose his scalchop. They later had a rematch, where it was defeated. Blitzle was revealed to have evolved into Zebstrika before Reunion Battles In Nimbasa!.

A Blitzle appeared in White—Victini and Zekrom and Black—Victini and Reshiram, under the ownership of Luisa. In the former movie, it was rescued in the middle of the desert by Damon when it injured its leg, and it was returned to Luisa with the help of Damon's Reuniclus's Psychic. In the latter movie, it made a brief cameo appearance while fulfilling a similar role.

Multiple Blitzle appeared in Lost at the Stamp Rally!.

Multiple Blitzle appeared in A Maractus Musical!, including one in a flashback.

In The Lonely Deino!, multiple Blitzle were under Bobby's care.

A Blitzle appeared in The Mighty Accelguard to the Rescue!, under the ownership of a shopper at the Driftveil Market.

Multiple Blitzle appeared in Stopping the Rage of Legends! Part 1.

In Battling the Bully!, Sean's father lent a Blitzle to his son and Glenn to use in a practice battle.

Two Blitzle appeared in Climbing the Tower of Success!, both under the ownership of a Trainer.

In Clash of the Connoisseurs!, Burgundy, disguised as Fauxgundy, reviewed a Blitzle as a possible Pokémon for Marigold.

A Blitzle appeared in Crisis at the Ferroseed Research!.

A Blitzle appeared in Rocking at the Virbank Gym! Part 1.

Multiple Blitzle appeared in All for the Love of Meloetta!.

In Kyurem VS. The Sword of Justice, the Swords of Justice legend featured multiple Blitzle.

A Trainer's Blitzle appeared in Jostling for the Junior Cup!.

In Team Eevee and the Pokémon Rescue Squad!, multiple Blitzle were living at a ranch at Virgil's house.

Two Blitzle appeared in Curtain Up, Unova League!, both under the ownership of a Trainer.

A Trainer's Blitzle appeared in Mission: Defeat Your Rival!.

Pocket Monsters BW: The Heroes of Fire and Thunder

A Blitzle appeared in The King's Identity...!!.

A Hiker named Andy uses a Blitzle during his Triple Battle with Black in Black's First Trainer Battle. However, he was defeated after Andy became dehydrated.

A Trainer's Blitzle appeared in An Odd Speech and Unraveling Mysteries.

A Blitzle appeared in Battle at the Dreamyard.

Elesa has a Zebstrika that she has owned since she was young and it was a Blitzle. It appeared in a flashback in Battle on a Roller Coaster.

A Blitzle liberated by Team Plasma appeared in The Final Battle: Crushed Ambition.

Blitzle resembles a zebra foal and may be based on two of Helios's steeds that pulled his chariot, Bronte and Sterope, which are Greek for thunder and lightning, respectively.

Blitzle is derived from blitz (German for lightning). Le may derive from little.