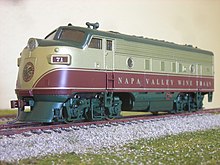 In 1938 Irvin Athearn built a detailed O scale model railroad layout in his mother's house, which gained an overwhelming response when he placed an advertisement to sell it. Deciding to make his career selling model railroad supplies, he became a full-time retailer in 1946. Athearn opened a separate facility in Hawthorne, California in 1948, and that same year he branched into HO scale models for the first time.[1]

Athearn acquired the Globe Models product line in 1951 and improved upon it, introducing a comprehensive array of locomotive, passenger, and freight car models.[2] Improvements included all-wheel drive and electrical contact. One innovation was the "Hi-F"[3] drive mechanism, employing small rubber bands to transfer motion from the motor spindle to the axles. Another was the double-ended ring magnet motor, which permitted easy connection to all-wheel-drive assemblies. Athearn was also able to incorporate flywheels into double-ended drives.[citation needed]

Starting in the mid 1950s, Athearn produced shortened versions of streamlined and heavyweight passenger cars based on Southern Pacific and Atchison, Topeka and Santa Fe prototypes. The company also offered a variety of freight cars with sprung and equalized trucks. The cars could be obtained in simple kit form, or ready-to-run. A model of the Budd Rail Diesel Car was introduced in 1953 with a metal body, and reintroduced in 1958 in plastic. The comprehensive scope of the product line contributed to the popularity of HO as a model railroad scale, due to the ready availability of items and their low cost.[citation needed]

When Lionel Corporation introduced their line of HO scale trains in 1958, many of the trains were produced by Athearn.[4] Athearn also produced trains for the short-lived Cox Models brand of electric train sets in the 1970s. Many of these products were pre-existing items from the Athearn catalog repackaged with Cox branding.[5] Freight cars packaged with train sets sold by Atlas Model Railroad Co. in the 1970s also came from Athearn.[6]

The company produced a model of the Boston & Maine P4 class Pacific steam locomotive which incorporated a cast zinc alloy base and thermoplastic resin superstructure. It had a worm drive and all power pickup was through the bipolar trucks that carried the tender. This item was discontinued after the Wilson motor was no longer available, and was not redesigned for a more technologically advanced motor.

Irvin Athearn died in 1991. New owners took control in 1994, but continued to follow Athearn's business model. Paul Lubliner's fine quality tooling for his "Highliners" brand of EMD F-units was acquired by Athearn in 1998 and integrated into their new Genesis line. In 2002, Athearn acquired Rail Power Products, as well as the tooling for modern 50' boxcars from Details West.[7]

Athearn was purchased in 2004 by Horizon Hobby, which moved the company from Compton to a new facility in Carson, California. At the same time, Horizon purchased Model Die Casting and their line of Roundhouse brand trains. A major international hobby distributor, Horizon Hobby is headquartered in Champaign, Illinois.

In 2006, Horizon purchased McHenry Couplers and in 2007 acquired the tooling for several trailers from A-Line, which are released in the Ready To Roll product line[7] In 2008, Athearn acquired the tooling for the short-lived "Tower 55" series of HO scale diesels from Overland Models. Much of this tooling made its way into the Athearn Genesis line.[7]

In mid-2009, all remaining U.S. production was moved to China and warehousing moved to parent Horizon Hobby. Sales and product development was moved to a smaller facility in Long Beach, California.[citation needed]

In May of 2021, the decision was made to close down the Long Beach office as Development was now performed remotely. By June of 2021, all service and spare parts for Athearn products had been shipped to the Horizon main complex in Champaign Illinois with repairs and warranty work all being performed there by July of 2021. The development team, sales and marketing continues to work remotely with all replacement parts and repair request are handled on site in Champaign. IL.

Athearn Trains was founded by Irv Athearn in 1946, manufacturing supplies and kits for O scale modelers. He soon branched out into HO scale in 1948, and later acquired the Globe Models line. By the mid-1950s, the company was offering kits and ready-to-run models made from injection-molded plastic, including standard freight cars and passengers cars that quickly achieved universal acceptance among modelers. Having a large production facility in California allowed for contract work, including the HO first scale trains offered by Lionel in the 1950s and by Cox in the 1970s.

Athearn continued to develop and offer new diesel locomotive models through the 1960s and 1970s, and making continuous improvements to make their models more in tune with scale dimensions. New owners assumed control in 1994, three years after Irv Athearn’s death.  The Highliners brand of EMD F-units was acquired from Paul Lubliner in 1998, followed by Rail Power Products line of locomotive shells in 2002, and boxcar tooling from Details West.

Horizon Hobby acquired Athearn in 2004, closing the factory in Compton, Calif., and relocating the offices to Carson, Calif. The Roundhouse line of model trains was acquired from Model Die Casting at the same time. The tooling for Overland Model’s short-lived line of Tower 55-branded diesel locomotives was acquired in 2008 and was incorporated into the Athearn Genesis line. The end of an era came in 2009 when Horizon Hobby announced the end of so-called “blue box” kit production, and that all manufacturing would move to China. The company continues to operate out of an office in Long Beach, Calif., while warehousing is maintained by Horizon Hobby from their headquarters in Champaign, Ill.