Hey guys! Today I have a handful of polishes that were sent to me from Live.Love.Polish to review. Live.Love.Polish is an online store that sells nail polish and cosmetics from many different brands. They state that all products they carry are 100% cruelty-free and do not contain formaldehyde, toluene, or dibutyl phthalate, which is a huge plus! They sent me four polishes from four brands; Glitters Daze, Starrily, Powder Perfect as well as I Scream Nails. Read on for more photos in info! 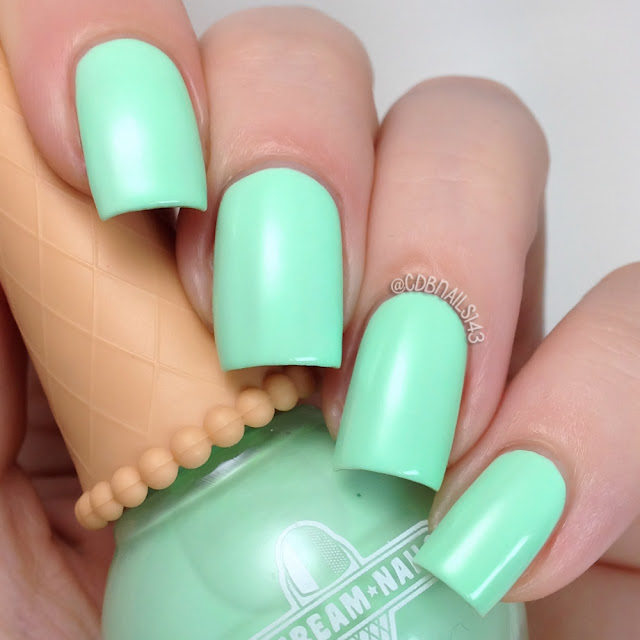 Description: Of Course Apple Sauce is described as a pastel green creme. Retails for $11/10ml 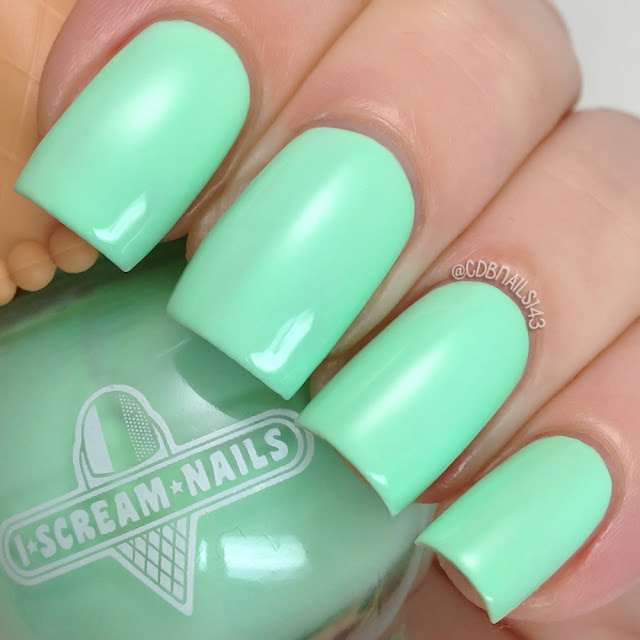 Formula & Application: I applied two coats to achieve full opacity and sealed it with a glossy top coat. Formula was great and applied well. First coat was on the streaky side but leveled out nicely by the second. 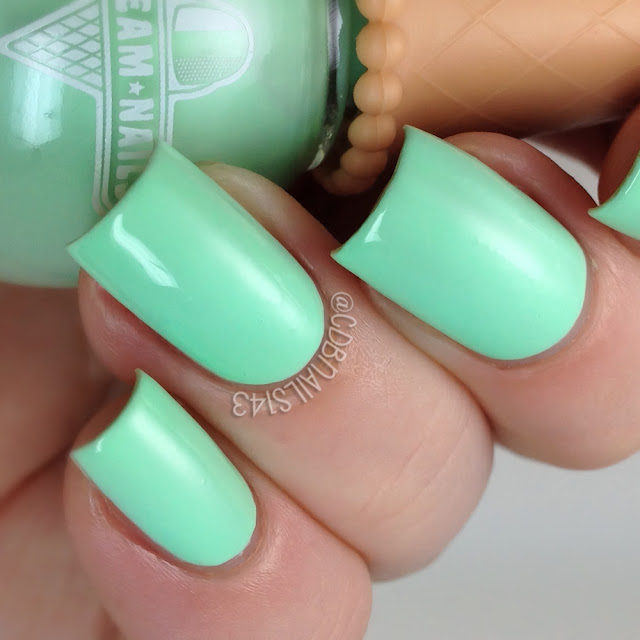 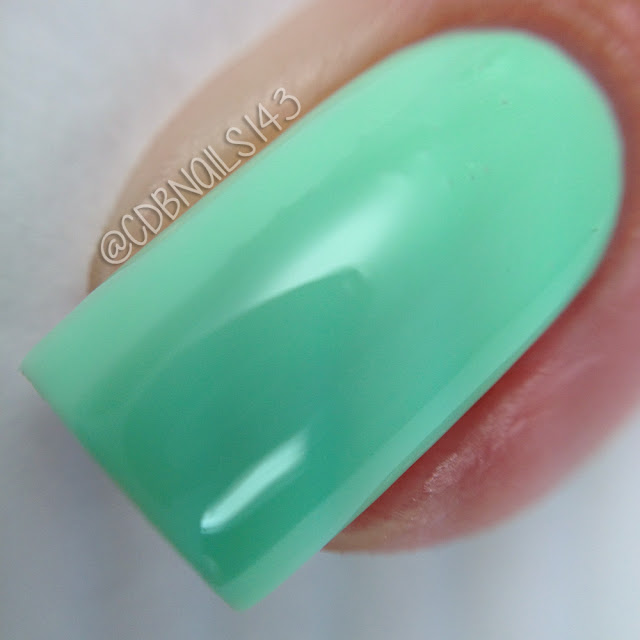 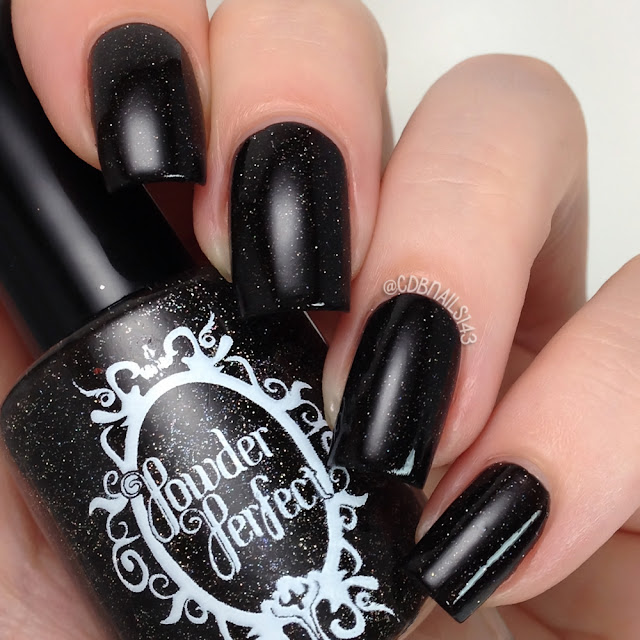 Description:Black Like My Soul is described as a black cream nail polish with sparkly glitter that looks like stars shining in the midnight sky. Retails for $12/12ml 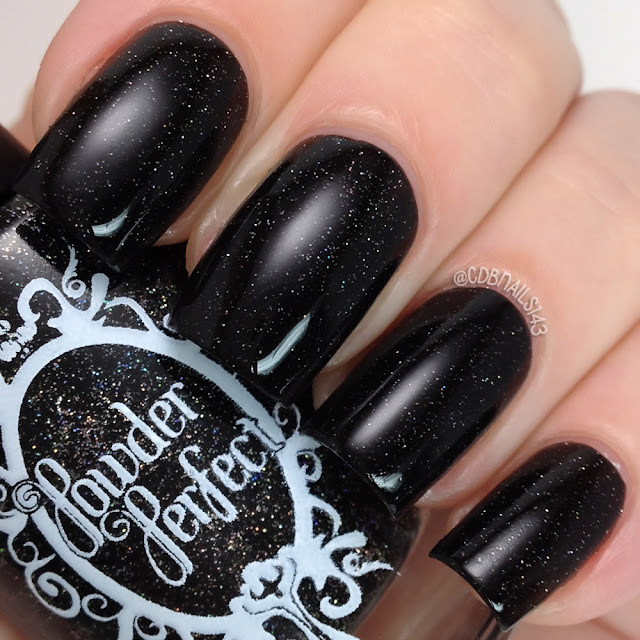 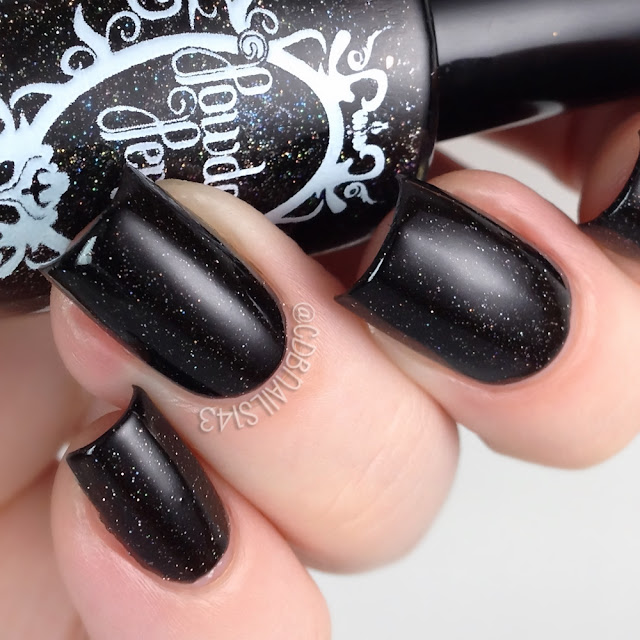 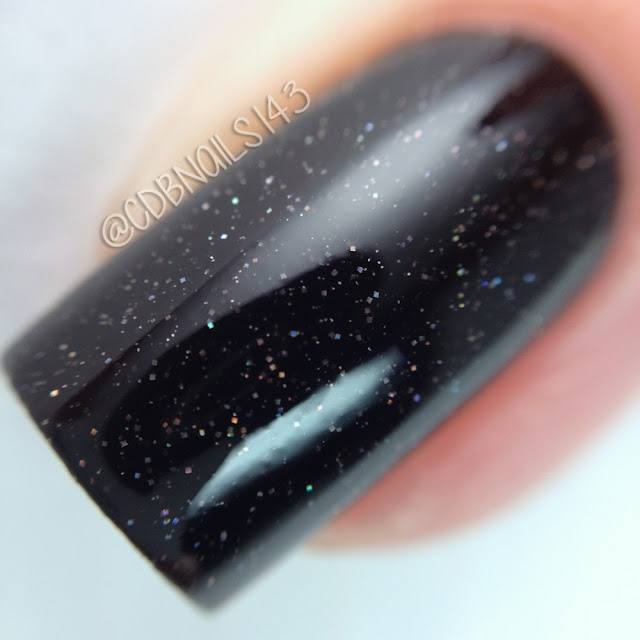 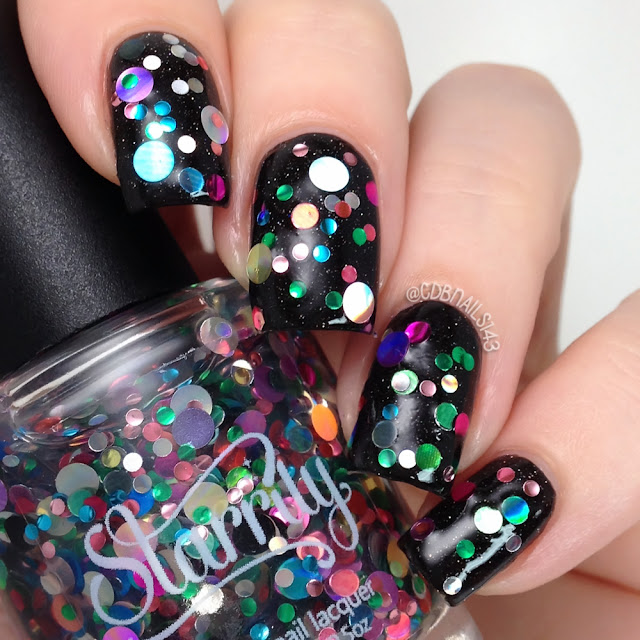 Description:Balloon Animal is described as a mix of different sized multicolored circle glitters in a clear base. Retails for $12/15ml 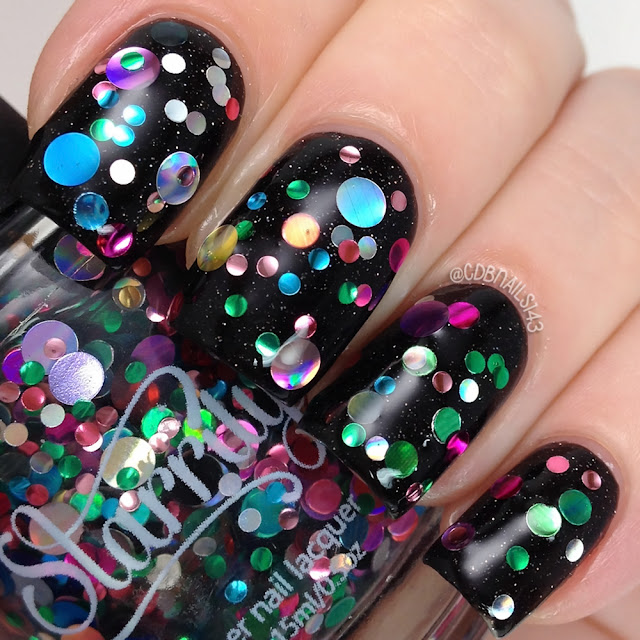 Formula & Application: I applied one dabbing coat over Powder Perfects "Black Like My Soul" and sealed it with a glossy top coat. I had no issues with having to fish but I did have to be careful when applying the glitters to not stack them on top of each other. Reminds me of a bunch of planets in a dark starry galaxy! For a smooth finish and to help keep the large glitters from lifting you must seal it with a top coat. 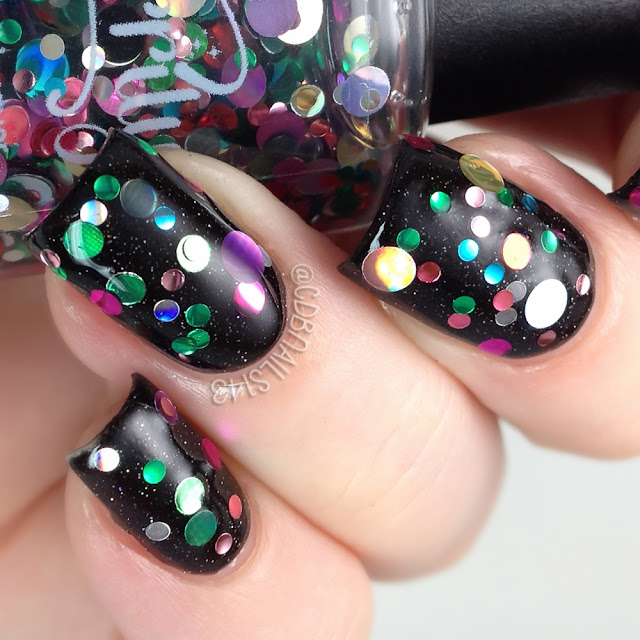 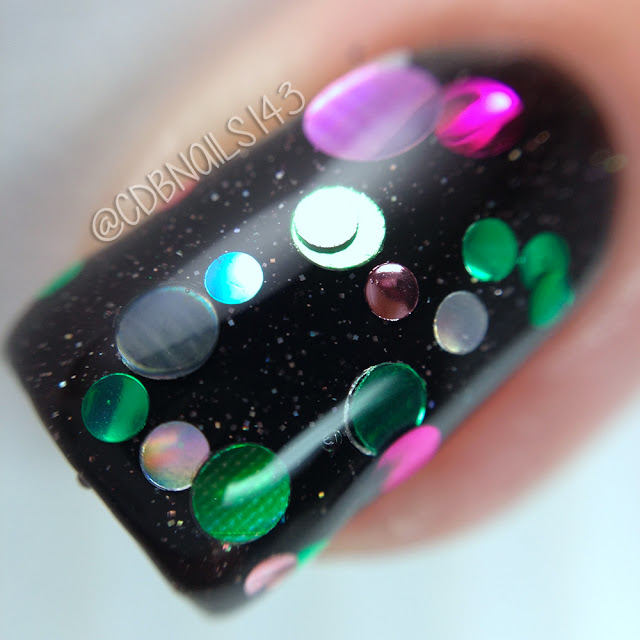 Description:Trippy is described as an emerald (jewel-toned) green multichrome polish. Retails for $12.50/15ml 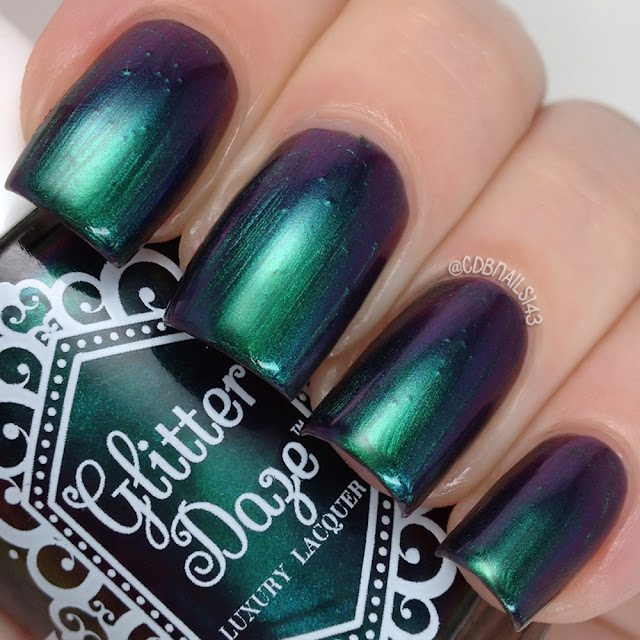 Formula & Application: I applied three thin coats to achieve full opacity and sealed it with a glossy top coat. It applied easily, not too thick nor thin but I did experience something I wasn't expecting based on photos I have seen on their website. I kept getting these tiny little bumps when I applied it. It was the first polish I swatched and thought maybe they were bubbles from the humidity but after I swatched the other three and didn't experience the same thing with them I figured It may have been something else so I re-swatched it(which are the photos you are seeing) and the little bumps were there again. I'm thinking maybe little undissolved pigment pieces? I expressed my concern with Live.Love.Polish and will update this post with their response and findings. 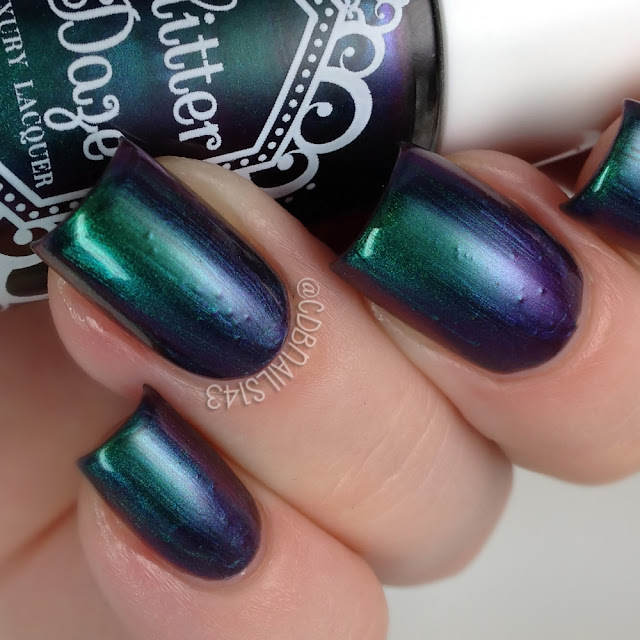 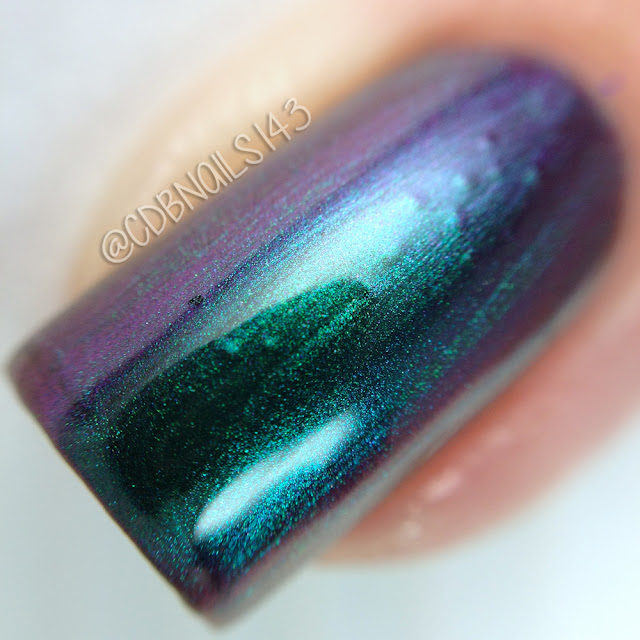 Overall: I really enjoyed all 4 polishes aside from Glitter Daze Trippy. I enjoyed the color but sadly due to the little bumps it's not something I will use again. My personal favorite was Powder Perfects Black Like My Soul. I love wearing black polishes and use them a lot as bases for my nail art so I know this one will be used tons lol. Which one did you like best?

All of these polishes are available at Live.Love.Polish. Please check out the links below for more info!

NEW YORK (FOX 5 NY) - A brother and sister duo in New York has launched their own e-commerce site devoted to nails. But before they could get started, the siblings from New Zealand had to pitch their business plan to immigration officers.

The idea for Live Love Polish came to Michelle Lin about two and a half years ago. She was hanging out with her brother, Wayne, in their studio apartment in New York City, painting her nails, while complaining about the lack of selection and variety in nail polish.

That complaint turned into a multi-million dollar business.

Michelle says that startups always come in to disrupt something or change something.

All of their polishes are 'three free,' which means they don't contain the three toxic chemicals most commonly found in nail polishes:  formaldehyde, toluene, or dibutyl phthalate.

The site features about 600 polishes from small producers all around the world.

Illimité is a brand new line, inspired by art history.

Cirque is a line of polishes, also from New York that they work with very closely.

And Starrily, another Live Love Polish favorite, is from Ohio.

Each brand featured on the site is tested for formula, application, and color.  Michelle says for every sample they approve, they reject about 12 others.

But, before they could even get started, Michelle and Wayne had to apply for a visa.

They had to file about 200 pages of paperwork and then pitch their business to an immigrations officer, explaining how coming to New York to start a business would benefit the U.S.

Ways jokes that the I.C.E officer must have liked their pitch, because he let them in.

Once approved, Wayne quit his job at Amazon and kicked in his savings. Michelle dropped out of NYU and taught herself to code, building the site and hand packing every order with a personal note.

When they first started about two years ago, Wayne says they'd be lucky if they got 200 orders a month. During their last holiday season, they were doing 200-300 orders everyday.

This year, they were named to the Forbes 30 Under 30 list, and it seems like their upward potential is unlimited.

Nail polish alone is a billion dollar business in the U.S., Michelle says. Nail services stacks up to about $8 billion in just the U.S., and is one of the fastest growing sectors in the beauty industry.

But Wayne and Michelle Lin aren't just building their own business, they're helping others along the way.

Wayne loves that Live Love Polish customers are also supporting the other small businesses who create the unique polishes sold on their site.

Most of their nail polishes cost around $13 and are available at: www.livelovepolish.com

What WE will do:

What Clients will do:

What EVERYONE will do:

Welcome! We are very excited you are here.We are a group of hardworking and passionate beauticians. We believe LOVE is always the answer. We also believe it is important to be positive, be kind, and be helpful. Aside from life philosophies, we stand out from other salons by offering:

We strive to be excellent in service, quality, and cleanliness … however if we ever fall short, please don’t hesitate to let us know. Your honest feedback is appreciated!

Our salon is located at the corner of Quebec and Lincoln in Highlands Ranch, Colorado 80130. In the same center as Walgreens and Tokyo Joes.  We hope to see you soon!

If you are seeking a nail salon where helps you to rejuvenate your beauty, Love Nails 2 is the ideal destination! Located conveniently in Stuart, FL 34994, our nail salon is proud to deliver the highest quality treatments to our customers.

At Love Nails 2, your waxing and nail salon in Stuart, we offer a warm, welcoming atmosphere where you can escape the stresses of everyday life and enjoy our transformative spa and salon services. We provide everything you need to renew your nails, skin, and mood in one location.

WE HAVE THE BEST THERAPIES

MANY CUSTOMERS ARE SATISFIED

We use ONLY the most trusted brands in the beauty industry. Our world-class products, services, and top technologies.

Our staff were trained to follow a proper sanitization protocol that puts our customer’s cleanliness as the number one priority.

Today I have the Live Love Polish The Felis Collection to share with you.

The Felis Collection features 6 magnetic nail polish.  100% of the net proceeds go directly to helping cats in need.  Koneko Cat Cafe in New York City helps save at risk cats by fostering over 20 rescues at a time.  They provide food, shelter, and love while helping the cats meet their potential families.  Let’s take a look at the Live Love Polish The Felis Collection.

I used all 6 of these polishes as toppers over a black creme nail polish.  They can be used on their own as well.  Two of the polishes look very similar in photos, but slightly differ in person.

“Artemis” is a magnetic nail polish that shifts from shades of blue, green, purple and magenta.  Shown is one coat over black plus top coat.

“Bengal” is a magnetic nail polish that shifts from shades of red, orange, gold and green.  Shown is one coat over black plus top coat.

“Calico” is a magnetic nail polish that shifts from shades of pink, orange, gold and green and I also saw some purple.  Shown is one coat over black plus top coat.

“Lynx” is a magnetic nail polish that shifts from shades of gold, orange and green.  Shown is one coat over black plus top coat.

“Siamese” is a magnetic nail polish that shifts from shades of blue and purple.  Shown is one coat over black plus top coat.

“Tabby” is a magnetic nail polish that shifts from shades of red, orange, gold and green.  Shown is one coat over black plus top coat.

First up is Stellar Halo, has the most stunning gold and copper shimmer in a grey base.  I used the magnetic wand that is provided with the polish and hovered it over the polish while it was still wet.  That's a really important tip, you have to use the wand while the polish is wet only, it won't work on dry polish! 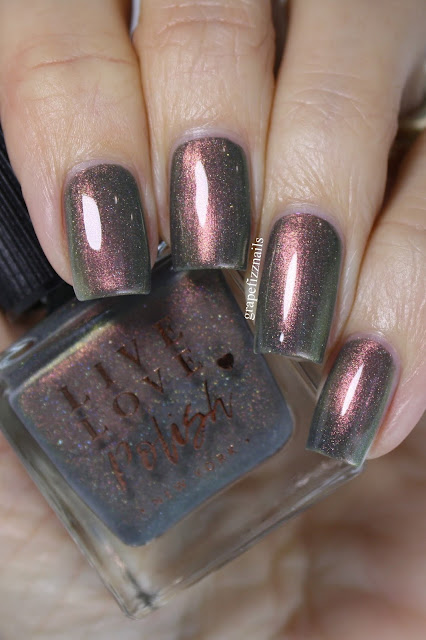 These polishes are so fun to play with, every time you move your nails you get a new design of 'glow' from that shimmer! 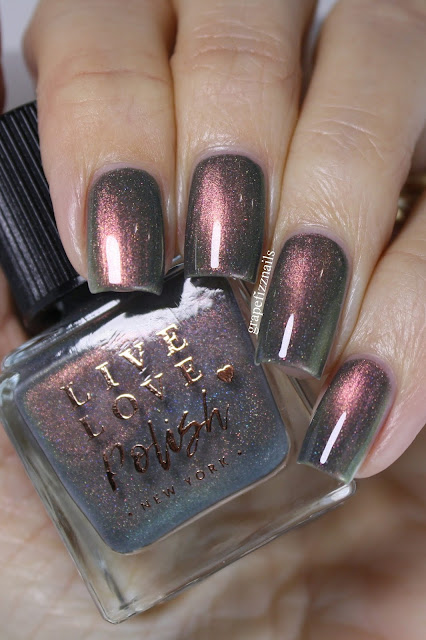 Cosmic Dust looks like a galaxy on your nails!  There is so much going on in this little bottle, it has a multichrome shift between the colors of red, orange green and gold.  It has holographic glitter and rainbow flakes.  Seriously, so much goodness! 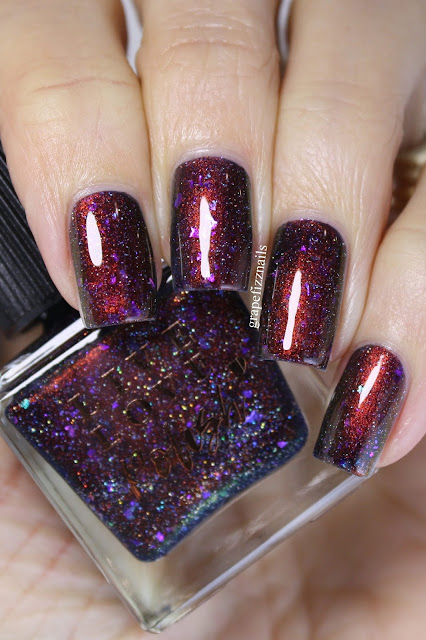 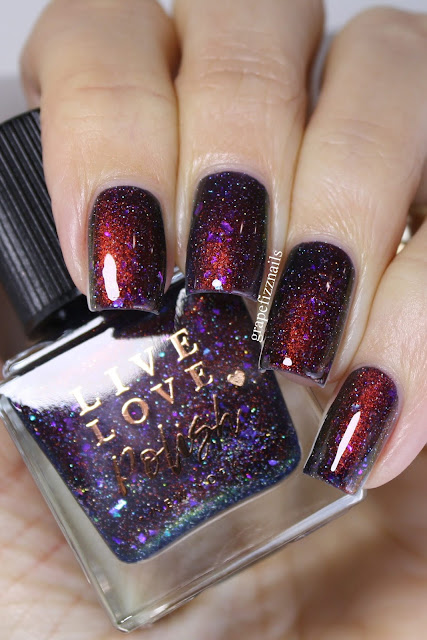 Dark Matter has a multichrome effect that flashes from green to blue to purple.  It also has scattered holo glitter.  The formula on all three of the Galaxy Trio is perfect and easy to work with, I used two coats for each polish. 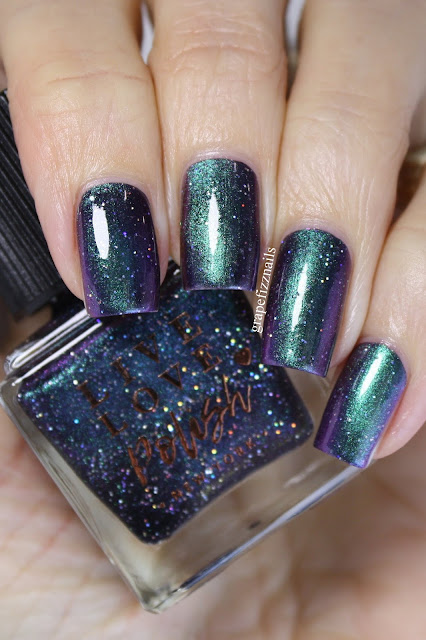 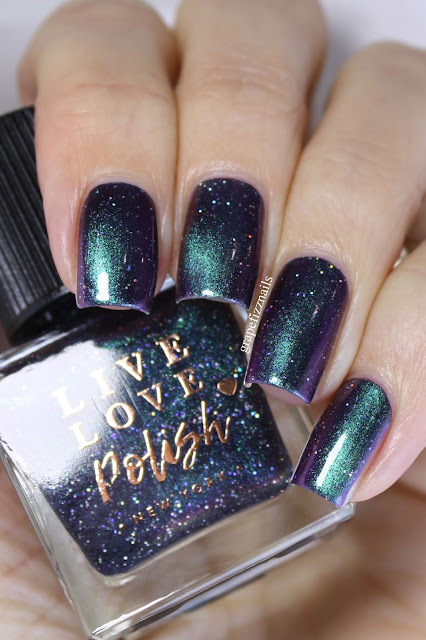 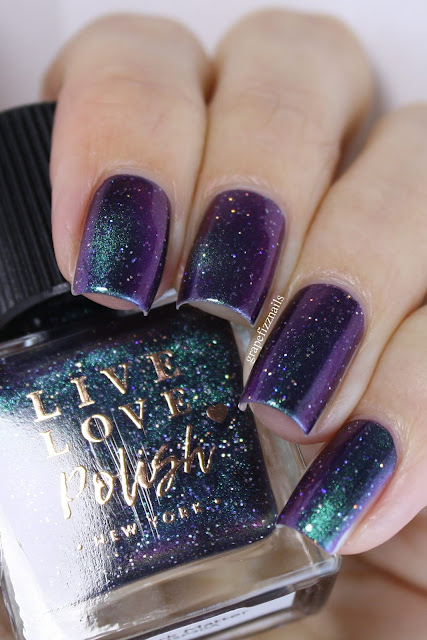 Wow!  Aren't they amazing?  I'm so obsessed with all three of these beauties.

Have a great day loves!