Up until now, I’ve been cherry-picking and talking about the most hyped and most popular figures from the 2020 Spider-Man Marvel Legends Demogoblin Series. But since it’s a requisite to buy all six figures to build the Demogoblin Build-A-Figure, I’m going to have to talk about every figure in the wave—including one of the weirder Spider-Man costumes Hasbro has done to-date! Marvel Legends Spider Armor Mark III is still available online discounted with Prime shipping despite the pandemic—is it worth ordering out for while you’re stuck at home? 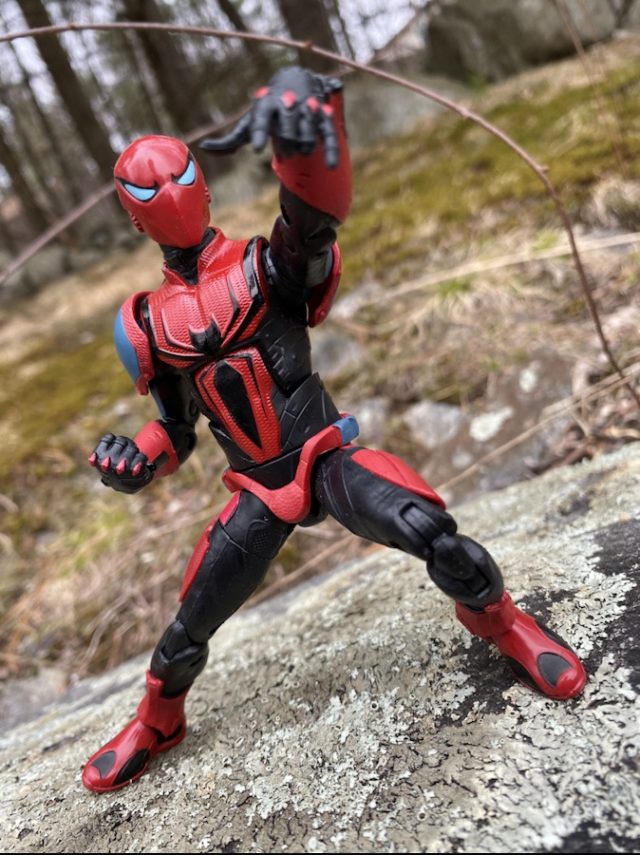 Alright, so I imagine “What the hell is the Spider-Man Spider Armor Mk III?” is the most frequent question asked the first time a majority of collectors see this toy—and it’s actually a pretty legitimate question with a surprisingly interesting answer.

While the Mark III Spider Armor appears as an alternate costume in the PS4 Spider-Man video game (hence why this figure gets the “GamerVerse” label on the box”), this is actually a blink-and-you’ll-forget-it armored suit that Peter Parker wore to fight the Sinister Six in Dan Slott’s run on Amazing Spider-Man. 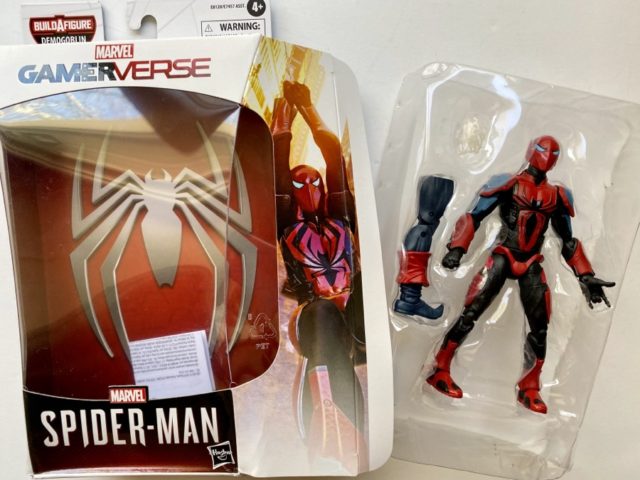 I actually read the comic this suit first appeared in back when it was published in 2012, but the story was such a non-entity in my mind that I forgot the armor originated there while I was playing the Spider-Man PS4 game. Whoops! 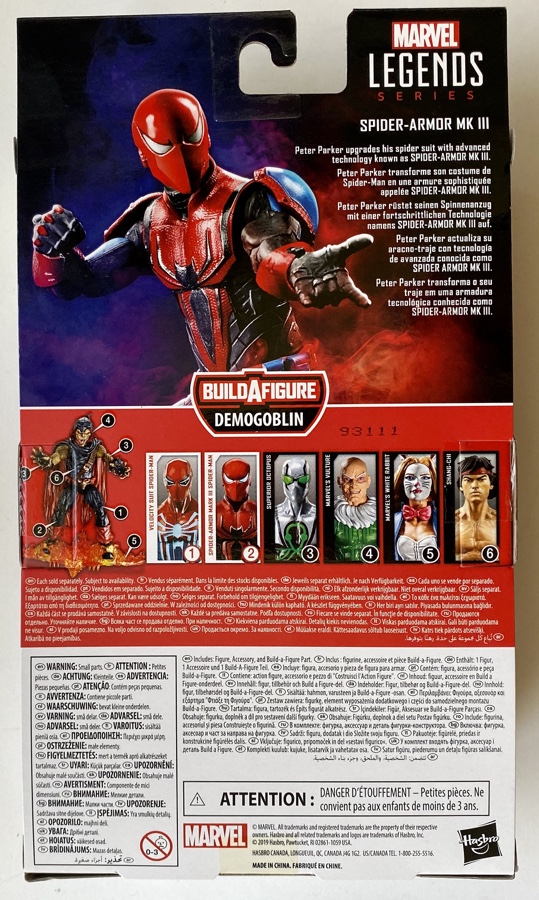 This is one of the least  “Friendly Neighborhood Spider-Man”-looking costumes in Spidey’s whole wardrobe, as it looks more like a cross between DC’s Red Hood and Jaime Reyes Blue Beetle than a Spidey costume to me. The costume has a real alien, vigilante vibe to it. While I’d be totally game for a goofy 90s silver Spider Armor figure, this iteration is a whole lot less enticing to me at a glance. 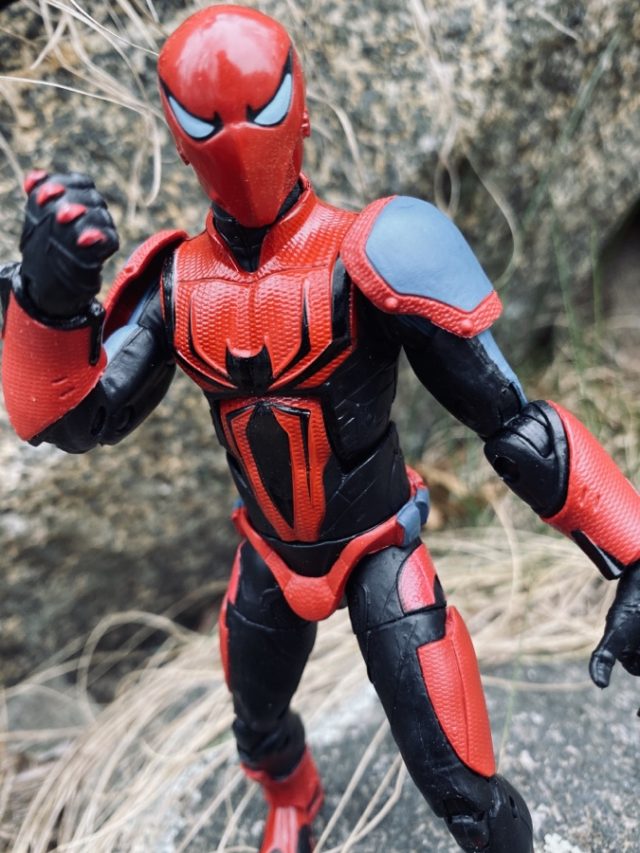 But wouldn’t you know it…? As I played with this guy and posed him for photos, my heart thawed somewhat. I don’t especially like this as a Peter Parker costume, but taken for what it is—as a no-nonsense, sinister-looking Spider-Man—there’s a real appeal to this action figure. 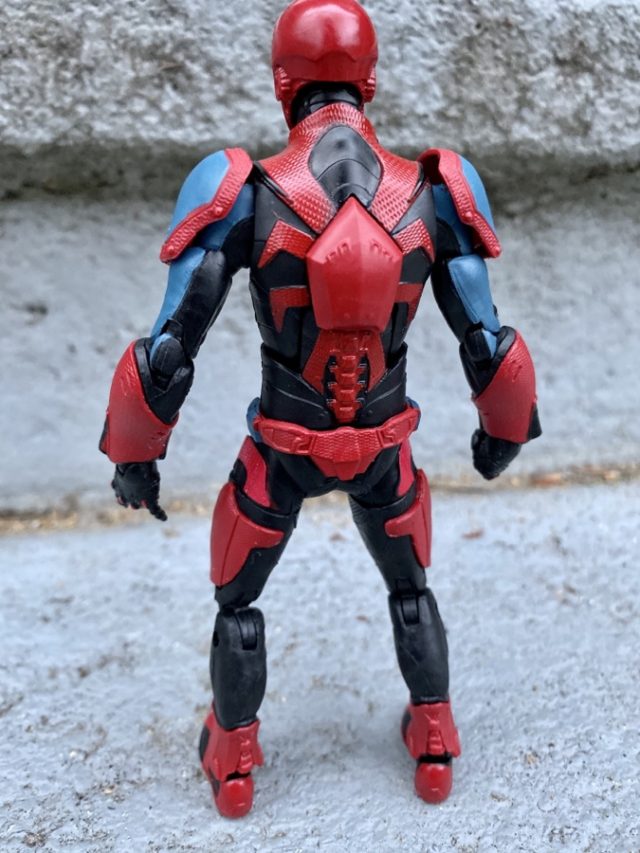 This 6” figure is covered in unique tooling and sculpting textures—detail-wise, it’s also pretty rad on top of looking cool. I love the alien feel to the armor when viewed from the back. 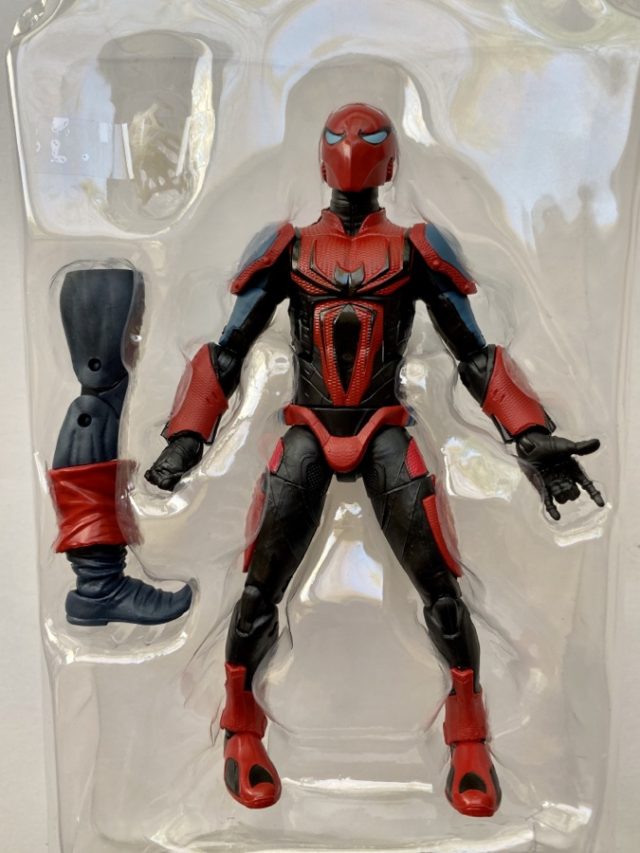 We get one accessory (besides a Demogoblin BAF leg) with the ML Spider-Man Armor Mark III figure, and while it’s small, it’s also all-out awesome: a web effect that you can stick onto most figures’ faces! 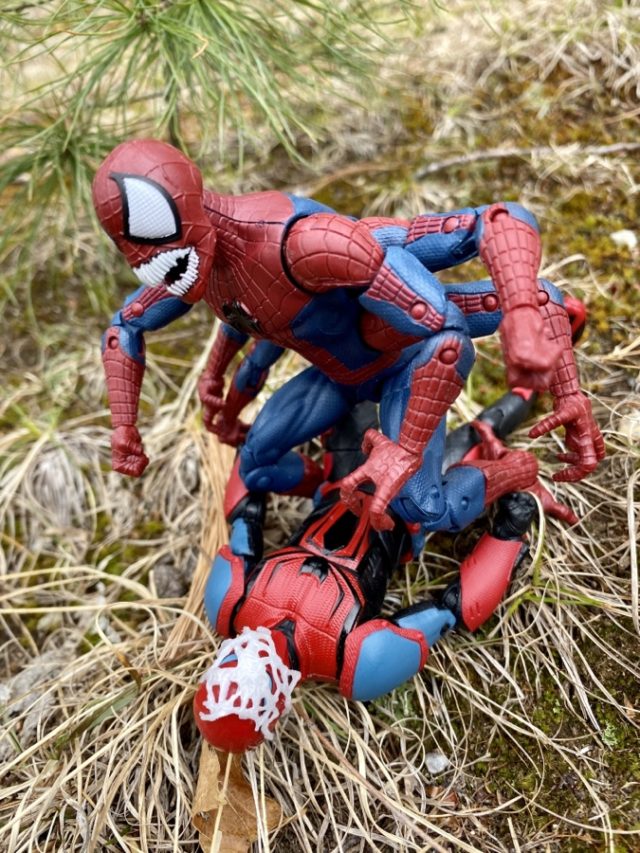 This web effect is ultra-fun and honest-to-God the thing I like the best about this whole action figure. I hope Hasbro recycles this web effects piece ad nauseam, because I want a ton of these to stick on villains’ faces! 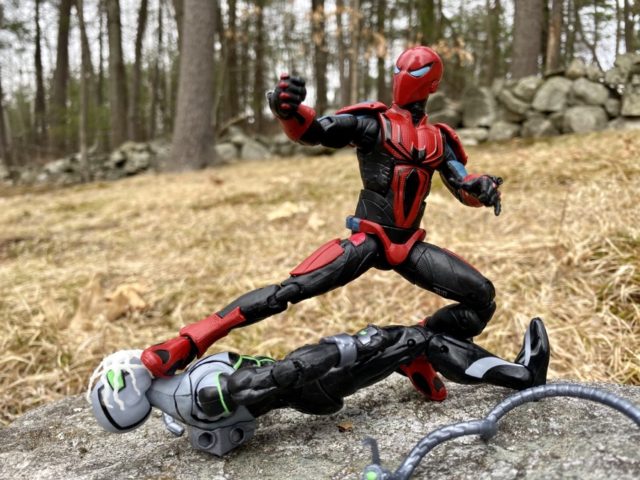 Of course, there’s also a few not-so-good aspects of this release. Besides the fact that this obscure costume isn’t recognizable to most fans (and is a favorite of even fewer), we get no switch-out hands here. Spider-Armor Mark III is stuck with a right fist and a left web-shooting hand for eternity. That’s not a terrible combo, but it does heavily restrict logical poses to stick this toy into. 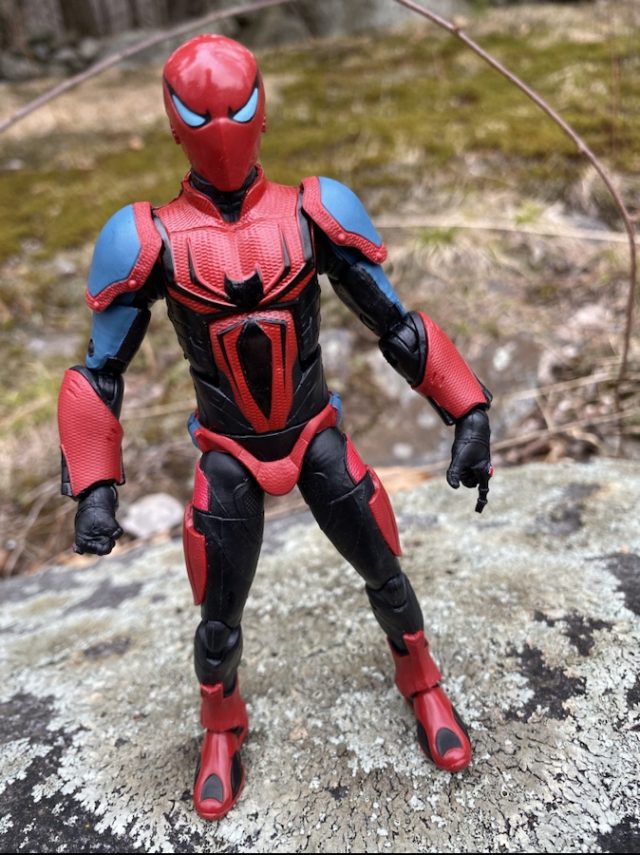 In addition, the butterfly swivel shoulders we’ve seen on many recents Spideys is absent, and the shoulder pads get in the way of posing the arms more than you would expect.

And for whatever reason, the red on the hips doesn’t match the red anywhere else on the figure at all. These issues aren’t huge deals, but they are a genuine hindrance on a character like Spider-Man who should have limitless posing possibilities. 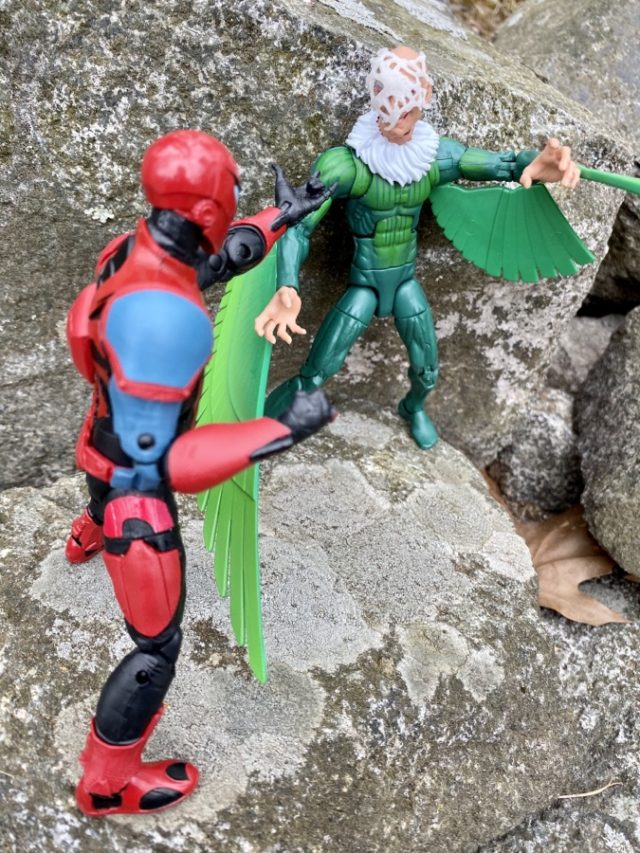 The complete articulation scheme consists of:

Despite a few limitations, I am overall satisfied for the most part with the articulation scheme. 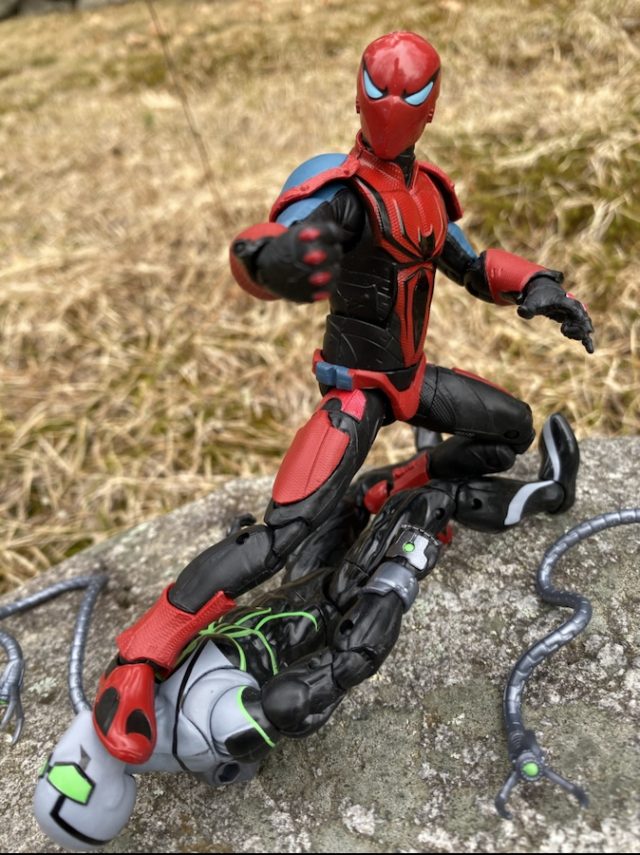 Overall: Marvel Legends Spider-Armor Mark III is one of those rare action figures where I unboxed and took photos in the mindset of hating on it in the review—and then decided it really wasn’t all that bad, even if the underlying design just isn’t my thing.

The mismatched red hips, lack of alternate hands and slightly inhibited articulation are minor issues that combine with an unfamiliar costume as strikes against this figure, but I think it’s overall a good release that far exceeds my minimal expectations.

First appearing in the Amazing Spider-Man #682, the Spider-Armor MKIII suit was created by Peter Parker with Horizon Labs' vast resources to fight the Sinister Six.

This suit has since been repaired and was placed back in storage in Peter's office at Horizon Labs until the lab was destroyed, leaving Spider-Man no option but to keep in his lab at Parker Industries. Well now he's looking for a new home for it, in your Funko collection.

This Exclusive Pop! features Spider-Man wearing his kick arse Spider-Armor MKIII, making it an absolute must for any true Marvel fan.

Created to fight each one of the super villain members of the Sinister Six.

Created by Peter Parker with Horizon Labs' vast resources to fight the Sinister Six if needed in a last resort. When Doctor Octopus started his last master plan before dying, Spider-Man knew he would have to use it to stop Octopus' attempt to speed up the Greenhouse effect.[1]

This suit has since been repaired and placed back in storage in Peter's office at Horizon Labs.[2] After Horizon Labs was destroyed,[3] Spider-Man kept the suit in his lab at Parker Industries.[4]

How to ride mount wow